Last weekend I filled a few holes in the driveway but there was one serious one left.

This one required serious muscle power and strength which was a bit beyond my physical-abilities. A chap who rents one of our buildings arrived and set to work on the hole which is in the entrance to the farm.

Meanwhile there was an issue with the broadband at the holiday cottage. I couldn’t quite understand why the network name wasn’t even showing up. I pushed all the leads in, restarted the router, all the lights were green… I needed help. Fortunately my only neighbour is a wizard with this type problem.

I was flitting between jobs outside and checking to see if the daughter in the cottage was ready to use our house broadband so I could settle her in. It was just all go.

We had a few concrete blocks which were smashed up to make the base.

Then a mutual friend and local farmer happened to be driving past so he was collared into helping too.

Then all was done, the driveway and the broadband was all fixed. I felt guilty as not lifted a finger really. Although I did collect all the breeze bricks, loaded them into the barrow and wheeled them around. One heavy load…

So now I owe everyone a few bottles of beer for their help.

It’s been a pretty full on all weekend to be honest.

Guests left our holiday cottage on Friday so I set to work changing beds on Saturday and sorting the linen out. Often we have a tight turnaround but our next guests are due in a day or two. This enabled me to do a couple of jobs in the cottage whilst it was empty.

The weather was gorgeous and it was lovely being outside. I filled a few holes in the driveway and cleared a couple of soak-away drains out too.

A few youngsters appeared with rucksacks and tents attached. An adult had seen them across the road to the ‘Right of Way’ track that sits opposite our farm. They were full of excitement. The chap drove off and they disappeared just out of site and I could hear them chatting and laughing as they’d obviously sat down to their packed lunch. It was a definite ‘extended’ lunch break which made me smile. The horses in the paddock opposite stood with their heads poised in their direction too.

An hour or so later my job was done and I offered to take my neighbours spaniel out for a hike. The sun was shining, it was an amazingly feel good factor of an afte

rnoon. Daisy was in her element and we headed off up the track opposite. You can walk for miles without hitting a road, it’s fabulous and I feel very lucky. I spotted the same group of kids at the end of the track and greeted them all with a smile and ‘hello’. They seemed quite chirpy still. I assumed they were awaiting a lift but thought it a little odd as they hadn’t really walked that far.

For most of the walk Daisy would run backwards and forwards checking I was still following. Then once we’d reached the chalk pits I popped her on the lead. Just as well as she picked up the scent of something. She was scouting to and fro o

n each side of the track with her tail wagging at 90 times to the dozen. Further on I chatted with another local farmer further on who was filling holes on an unmanned road. No one really owns it but he occasionally takes it upon himself to fill in the pot holes. Must be the day for hole filling.

After an hour and half I reached the track home and smiled as I heard the same youngsters. I could hear one of them saying ‘Look it’s that same lady and her dog.’ I stopped to talk to them this time asking if they were alright. They’d got lost basically and were supposed to be up at a local common camping with the rest of the ‘scouts’. I told them the track they should have taken but said they should stay put as they’d rung their scout leader who was coming to find them. Further down the track I could hear ‘the whistle’. I knew the scout leader was just around the corner, I grinned. I told him where the group were. He said he’d never done so much walking with one group. Another group who’d left after them had already arrived at camp. He said ‘Ahh they told me they’d seen a lady with a dog twice.’ He’d suggested the first time they’d asked me the way. They were undergoing their orienteering badge. We both laughed at the whole saga and we went our separate ways. 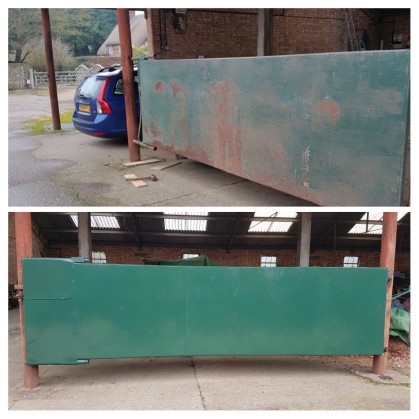 Last weekend we moved a 14 foot gate from one location on the farm to another. An extra piece of sheet metal has been added and a new catch. So today I used the wire brush and rubbed the whole gate down and painted it.

The day is drawing to a close but I’m cloaked in a feeling of satisfaction.